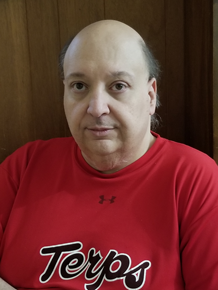 Christopher “Chris” Perkins is a 53-year-old man who lives in Assisted Living of Rockville’s facility, located in Rockville, MD. In 2011, he ended up in a nursing home due to blood clots forming in his legs and lungs. These clots formed from his diabetes diagnosis and it left him paralyzed from the waist down. He spent time in rehab learning to walk and care for himself again. After this, he transferred into Harmony Hall’s Assisted Living Facility in Howard County via the Community Options (CO) waiver where he stayed until the summer of 2018 before moving into his current facility. I met Chris when he transferred into Assisted Living of Rockville due to Harmony Hall no longer accepting CO waiver residents. Due to Chris’s arthritis, poor gait, diabetes, manic depressive disorder and bipolar disorder, he requires care with many ADLs and IADLs and benefits from the monitoring and personal assistance help given at his facility.

Chris is very friendly, caring and intelligent. He is also family oriented. He grew up in Silver Spring and had a good childhood with a close relationship to his parents as an only child. He attended St. Bernadette’s School and later Good Counsel Catholic High School. After graduating from high school, he pursued becoming a priest at University of Notre Dame in Indiana. However, due to his undiagnosed diabetes and bipolar disorder at the time, he was unable to complete this program and the school did not have the resources to help him while there. He returned home and later completed night school at University of Maryland. Chris loves to write and he wanted to become a journalist. He enjoys writing about his experiences with his schooling along with his medical and mental health conditions. He types letters to family members to mail to them. He collects many things including stamps and coins. He likes sports and follows college basketball, football, baseball and hockey. He is excellent at memorizing sports statistics. He also taught himself how to play chess.

Kimberly Quinn was assigned to work with Chris as his Supports Planner. Her Initial Plan of Service with Chris was developed to help him into Assisted Living of Rockville’s facility from Howard County. During her following contacts and quarterly visits, Kimberly would ask Chris about equipment such as orthotics in his shoes, diabetes medical supplies and possibly participating in day program activities. She also began to speak with him about his family support and care at his facility. Chris has a cousin that manages his money as financial Power of Attorney that is also involved in his care. Chris visits with his extended family throughout the year. Kimberly located a Chess Club open to visitors at a local senior center due to his interest in chess and Chris began to tell her about his other hobbies that fit his introverted nature. Chris’s medical care is overseen by visiting doctors at his facility which see him to monitor various medical conditions and manage his ten daily medications. Chris reports he likes all of the doctors plus he enjoys working with the management at his facility. Chris describes how he is able to go on outings with his facility staff and housemates. He also reports more positive interactions with staff at his current facility and that he is allowed both more independence when he wants it and help with care when he asks for it. He also enjoys having a private room. Chris’s goal for this year is to lose weight to better his health, his diabetes and to take more pressure off of his joints which hurt due to his arthritis.
Kimberly wanted to share Chris’s story as he states he has been stable medically and mentally since entering the CO waiver and that the program has benefitted him. He feels he is more stable since transferring into his current facility and is open to trying new activities. He has expressed appreciation for how supportive she is of him during visits when he has experienced others not treating him like an adult in the past. Chris feels the Person-Centered approach the CO waiver takes with its participants has left a positive impact on him.