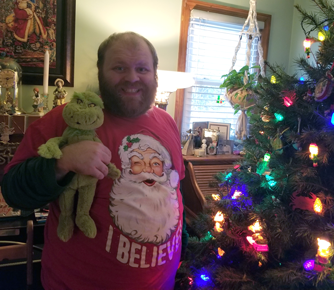 Gary is a 29 year old young man who lives in Glen Burnie with his Mother and Father. Gary has a diagnosis of Autism, and requires a 1:1 to support him. While some may think this is a challenge to leading a fulfilling life, having extra support has helped Gary to become an active member of the community, in more than one way. On Mondays, Gary volunteers at a local church, NCOEN. He helps organize the cans and food products and throws away any expired food, and picks up bags and boxes for people who are coming to utilize the service. On Tuesdays and Fridays, Gary works at John’s Shredding Company. This is a company owned by someone he knows at The Arc. Gary makes minimum wage and works at his own pace, which he really appreciates. He enjoys the work a lot and this is the first job he has ever had!   Gary has gained more and more confidence in himself as a result of his job and relationships.

Gary is also an artist at Make Studio in Baltimore. Make Studio is a community based arts organization for people with disabilities. Gary loves being at the studio on Wednesdays and Thursdays each week, and is a fantastic artist. He has sold many of his art pieces at events held through Make Studio and other events in Baltimore.