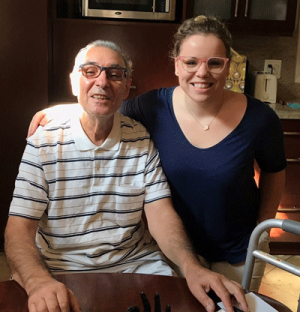 Mr. Gavrielov is 73 years young. He moved to the United States 27 years ago. He currently resides in Pikesville with his family. Mr. Gavrielov’s love for design and creation led him to a career as a jeweler. Today, you will find Mr. Gavrielov spending time with his family, playing chess, and of course still creating beautiful jewelry when he is inspired to do so. 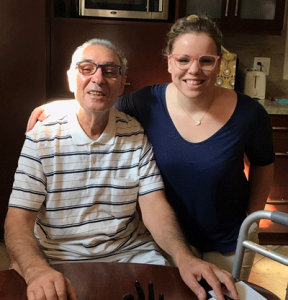 Mr. Gavrielov has been enrolled in the Community First Choice (CFC) Program for a little over a year. Mr. Gavrielov started with 18 hours of personal assistance when he first entered the program. This service allowed him to receive support in the comfort of his home when his family was not home to assist him. Unfortunately, in June 2019, Mr. Gavrielov suffered a mini stroke causing him to lose his balance and tumble down a few steps. Mr. Gavrielov was left with injuries such as a punctured liver and kidney, a head injury, and PFO (a hole in the heart). Luckily, Mr. Gavrielov’s puncture injuries healed themselves, so surgery was not needed. However, the PFO was discovered during this event and a non-invasive surgical option was suggested and performed a few months later. During his recovery period,

Mr. Gavrielov required maximum assistance with most of his ADLs. Mr. Gavrielov and his Supports Planner, Brooke, were able to gather medical documentation from his hospital stay and submit a revised plan of service (POS) for 35 personal assistant hours for a 3-month recovery period. During his recovery period, Mr. Gavrielov was unable to participate in physical or occupational therapy due to the extent of his injuries. When Mr. Gavrielov’s annual plan of service (POS) was due, he discussed the need for additional personal assistant hours to accommodate him. Mr. Gavrielov and Brooke then created a task list indicating what days and times a personal assistant would be needed and what tasks they would be providing assistance with. In addition to the task list, Brooke also suggested submitting the last three clinical notes from Mr. Gavrielov’s primary care physician (PCP). With the task list and most recent clinical notes, Mr. Gavrielov’s annual plan of service (POS) was approved for 28 personal assistant hours per week.
Mr. Gavrielov stated, “I am very thankful for the services available to me. As my needs increased, I was able to increase my services. I know in the future if additional needs arise, they will be addressed with the utmost care. I have a wonderful relationship with my Supports Planner, Brooke. She feels like an extension of my family because of the genuine interest she shows in my well-being.”
Brooke explains that it is a true pleasure working with Mr. Gavrielov and that she always looks forward to their meetings.