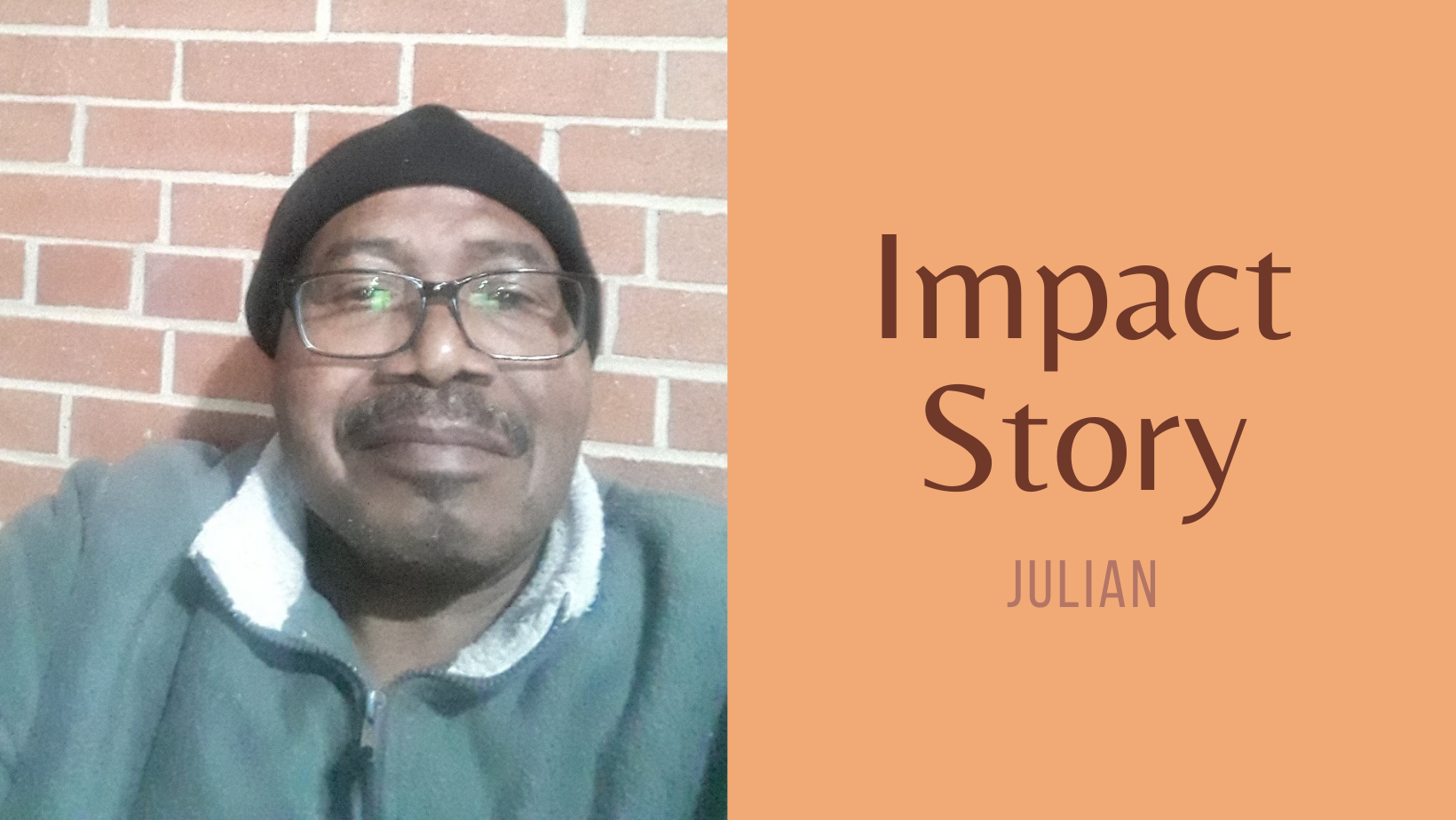 Julian is happier these days.  He is living on his own and able to manage his care with the help of his SCI Supports Planner, Kimberly. Julian was born in August of 1955 in Virginia. A hard worker, he began his employment in the custodial department for the Prince George’s County School Board. Then he attended Lincoln College of Technology to become a heating and refrigeration technician. Julian also worked as a helper for a heating and refrigeration department at the Adelphi Laboratory Center.

In 1996, he applied for medical disability payments while he worked and was approved. Several years before his Supports Planner became involved, Julian began to experience a decline in his health. He had a bowel obstruction which landed him in the hospital, knee replacement surgery from a past fall (which required additional surgeries due to complications involving infections), and a spinal fusion surgery, which meant a long recovery. Julian also experienced a relapse as he tried to manage the pain of the surgeries. He ended up going back and forth between hospitals and rehabilitation centers and eventually ended up at Layhill Center, a nursing and rehabilitation center in Silver Spring. There, he applied for the Community Options (CO) waiver which would help pay for a place to live and daily care assistance.

In June of 2020 Supports Planner, Kimberly, was assigned to assist Julian with transitioning into the community. She worked diligently with him and his brother, who assists with his care and finances. Kimberly also partnered with the nursing center team to ensure the transition ran smoothly and would be a permanent change. Julian moved into an independent living apartment in Silver Spring, where he currently resides. He lives alone but receives personal care assistance 6 days a week with a pending request for increased personal assistance hours. His new apartment community has a cafeteria that provides a meal a day for Julian, which is included in the cost of his rent.

With the help of his Supports Planner, Julian was able to utilize the CO Waiver to receive Transition Services which covered the cost of groceries upon his discharge to his apartment. Kimberly was also able to assist with coordinating services by using a mixture of both Medicaid services and non-Medicaid services such as: obtaining medical supplies, groceries, researching thrifty options for household items, obtaining physical therapy sessions, acquiring a rollating walker and shower chair, and coordinating edits to his bathroom. Kimberly also worked with Julian and his brother to apply for 3 housing vouchers and provided information on local food pantries, low income Internet and discounted computers, low income dental clinic applications and home delivered meals options during the pandemic to include Food and Friends and Meals on Wheels.

Now that he has returned to the community with the CO Waiver, Julian is able to make choices about his life, his schedule, and his medical treatments.  With SCI’s Supports Planner, Kimberly and the CO waiver services, Julian has improved his quality of life by becoming more mobile and independent.