The Hero from Liberia 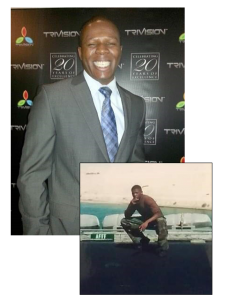 In fear of their lives, during a Coup in Liberia, Thomas Gaye’s parents brought him and his 10 siblings across the Atlantic Ocean, to the USA, to settle in Minnesota. Assimilating into the American culture, Thomas earned a high school diploma and decided to join the Navy in July of 1999. Stationed in Norfolk, Virginia Thomas served on the USS George Washington. He was a Flight Team Captain and was responsible for making each aircraft assigned to him to be mission ready prior to next takeoff. His carrier supported missions flown over Afghanistan and Iraq. After serving active duty until 2003, Thomas remained a reservist for another four years. Thomas utilized his G.I Bill benefit and earned a B.S in Real Estate and Economic Development from the University of Baltimore. With a keen entrepreneurial spirit, Thomas set up a Staffing business in Montgomery County, Maryland. After several successful years, Thomas experienced some unfortunate business setbacks, dissolved his company, and moved to Frederick, Maryland. It is in Frederick that Thomas sought veteran housing support, employment resources, healthcare management, peer and mentor supports, and case management. In developing a person-centered plan, Thomas has goals of going back to school and getting other IT certifications. Thomas is continuing his business development ambitions by offering his skills for web site design, marketing, video editing and real estate management. Thomas appreciates the freedom he helped protect in the country that protected him.