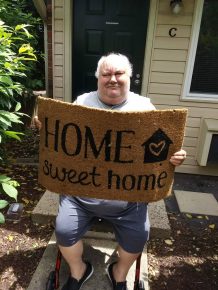 Take a moment to look at this picture because it displays fortitude and perseverance. Steve is 59 years old and is now living independently on his own in an apartment in Frederick, MD. Although he has had many trials and tribulations throughout his life, he has learned how to advocate for himself and shown remarkable ability to overcome difficult circumstances, some of which include divorce, incarceration, addiction, homelessness and having served in the Army during Desert Storm.

Several years ago, Steve faced yet another difficult situation. Due to years of alcohol abuse, he was hospitalized at Frederick Memorial Hospital for Chronic Alcohol Abuse and Cellulitis infection. Without a home to be discharged to and not having any family to assist him, he was sent to Frederick Health and Rehab for recovery. It was there he was able to lose weight, treat his depression, lower his blood pressure and manage his diabetes. Steve spent 3 years at Frederick Health and Rehab and in June of 2019, he was assigned to his Support Planner Marjorie Schlosser.

Getting Steve approved for the CO Waiver was not a challenge at first. Although he was alone and without informal support, he was motivated and organized. Marjorie was able to locate resources for housing. She assisted him with the use of Social Serve and linked him to the Bridge Subsidy for which he was approved in January 2020. Marjorie was in frequent contact with the Department of Housing and Community Development to ensure all documentation was completed and received on both ends. After his approval in January, Steve had until May to find an apartment. Marjorie was able to provide resources to start the apartment search and Steve found a perfect place to meet all his needs at Little Brook Apartments. He was able to sign his housing contract on March 4th with Marjorie by his side for support. From there, Marjorie arranged Steve’s discharge planning meeting with the nursing home and this meeting took place on March 10th. The team agreed that a discharge on April 1st would be an obtainable goal. However, by March 13th the nursing facility closed their doors due to the COVID-19 pandemic. On April 1st, the team and Steve discussed postponing Steve’s discharge back into the community for safety measures since the facility was quarantined due to several positive cases. Steve was very disappointed and agreed to remain at the nursing facility for another 30 days. Marjorie worked very hard to continue the process of planning Steve’s return to the community. She was diligent to prevent the pandemic from becoming an obstacle that could not be overcome. She remained in contact with everyone involved. She was personally updating the Department of Housing and Community Development, the management at the apartment complex, the nursing home Social Workers, all scheduled providers, and Steve on a daily basis. She was able to link him with Abuzz Healthcare Services LLC. This personal care agency was willing to work with him through his transition despite his possible exposure to the virus at the nursing home when other providers declined to do so. They offered to be there and walk with him through his front door after his long awaited arrival to his new home. Through Marjorie’s tireless efforts, Steve discharged successfully to his apartment on May 1st and was enrolled in the CO Waiver. With the CO Waiver transition funds and Money Follows the Person funds, Steve was able to leave the nursing facility and enter a fully furnished apartment that included a new bed, dresser, new linens, small appliances, living room furniture and groceries. It was a challenge, but Marjorie coordinated everything so all these items would be there upon his arrival. Steve’s caregiver agency provides 28 hours of personal care a week and he also receives 10 home delivered meals a week. For safety precautions when he is home alone without care, Steve wears a Personal Emergency Response System (PERS). Marjorie has helped Steve to revise his plan several times since arriving home to continue to ensure he has exactly what he needs to remain safe.

Steve is thriving in his new apartment. He celebrated 12 years of sobriety and continues to attend AA meetings. While home, Steve is able to attend church with All Saints Episcopal Church in Frederick online. He reads the Bible and continues to reflect on how he can help his community. Marjorie, his Support Planner, recalls although it turned out to be a challenge to discharge someone home during a pandemic, it was because of Steve’s motivation and determination that helped the team overcome all those challenges. As a team, they were able to address each roadblock and hit it head on. “It is a true pleasure to work with Steve. At one point I didn’t think we could get his groceries due to the pandemic, but everything worked out and I’m very happy for him,” Supports Planner Marjorie stated reflecting back on the triumphant experience.