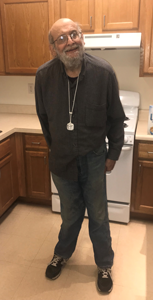 Since July 2018, the Coordination of Community Services (CCS), Misha Sanders, has had the pleasure of working with Neil Speert. A kind gentleman, who loves his Ravens, Orioles, spending time with his personal supports staff, and eating out at Burger King at least once a week. When they met, Neil lived in a very unhealthy environment. He is a “collector”, and often collects items but had struggled with maintaining the cleanliness of his home. Neil’s apartment was extremely unsanitary, and overall seemed to affect his mood, as well as his health.

Neil lived in his apartment for 13 years, and it needed a great deal of upgrades. Neil also needed assistance with keeping the apartment clean. The CCS could tell that he was very discouraged, and he would often share how badly he wanted to move. His personal supports staff assisted with helping him to maintain cleanliness – 3 days out of the week. It seemed that Neil began to feel overwhelmed with the way in which his home looked, as well as felt. It did not feel like a home. The CCS advocated on Neil’s behalf for the property manager to do some renovations to the apartment, but they would not agree. The CCS remained committed and soon got a call from Neil, advising that he received a letter from Weinberg Village II in Owings Mills. He was placed on a waiting list for reduced housing (for seniors) in 2016. Two years later, his name had been chosen to join the Weinberg community! Neil was extremely excited and wanted to take advantage of the opportunity. With the help of Neil’s Case Manager at the JCS, personal supports staff and his CCS, Neil signed his new lease with Weinberg on 10/30/18. He was over the moon happy! He told his CCS that he was so much happier in his new home, and according to Neil’s personal supports staff, he has maintained a healthier living environment. Neil still collects but keeps it manageable. This transition was a little scary for Neil, but he admitted that change was a good thing. WAY TO GO NEIL!