Impact on the People we Support – Peter’s Story 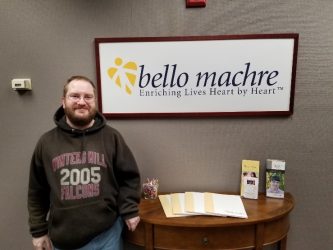 Peter was a transitioning youth many years ago. He began DDA funded services upon his graduation from the Carroll County Public School System but did not have a good experience and withdrew from those services. He spent many years at home with just his family providing support. Peter was content with his life; he expressed no interest in meeting new people or venturing out. His parents were happy to support him in their family home, though they worried about the future. In February 2018, Tammy Dilley/CCS received a notification that Peter was chosen as a candidate for one of the new DDA waivers. She contacted Peter and his family to share this wonderful opportunity. To her dismay, Peter and his family decided they were not interested in pursuing funded services. Determined, Tammy did not take no for an answer! She continued to talk with Peter and his mom about what services could look like for him and how it would be different than what he experienced before. Reluctantly, after several months, Peter and his family agreed to meet with Randon Bittings from Bello Machre. Randon went out of her way to make Peter feel comfortable….even taking a golf cart ride with him when she went to meet the family! Due to Tammy’s persistence and Randon’s warmth and inviting personality, Peter and his family decided to move forward with requesting just a few hours of supports per week.

Bello Machre began providing support services to Peter in early November 2018. The plan was to have the support staff spend time with Peter in his home, working on some of the skills he mentioned he wanted to learn there. The hope was that once they built a rapport, Peter may be willing to go out into the community with his support staff. In just a couple of weeks, even prior to his “30-day meeting”, Peter’s life had changed immensely. He had already ventured out with his support staff and was talking about needing more support hours in order to do all the things he wanted to do! Peter’s parent’s feel a sense of excitement for him and relief that he now has a connection other than to them.

In Peter’s words: “I haven’t had opportunities to make friends due to my anxiety and fear of the outside world. For years, I preferred to stay with my family and would only go to very familiar places. I’ve only been with Bello Machre for a few short weeks and I already gained confidence in myself! For the first time, in a long time… I want to work on building relationships with peers. I would like to research some community groups such as Aktion Club, so that I may join a club or group someday. I decided that the easiest way for me to ease into this is by working with staff on meeting other individuals within Bello Machre in hopes of building relationships. I think that is my comfort zone, at this point. As I feel more comfortable, I see myself integrated within community, both with people who have disabilities and those who don’t.

When I am out in my community I like to go to the mall, video game stores, car shows and the local airport. I’ve enjoyed doing that with support staff. We have also gone out to eat! Over the next year I see myself participating in community activities such as miniature golf, duck pin bowling, and visiting a coffeehouse venue. I even want to plan a day trip to Ocean City during cars week. I’ve never been that far away from my family, but I want to try it. I also want to learn how to be more independent in my meal preparation. I want to learn how to use the microwave and toaster oven independently. I may even want to attempt to use the stove! I love making dipping sauces, the spicy ones are my favorite! Perhaps I can join a cooking class. Every day during the week except Wednesday, I like going to the Westminster Town Mall to walk the mall. I enjoy providing feedback and often fill out suggestion cards.”

Congratulations to Peter for facing his fears and being willing to try something that truly scared him. Many thanks to Tammy/SCI and Randon/Bello Machre for sticking with Peter and supporting him to make this life-altering change!!