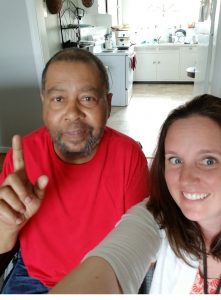 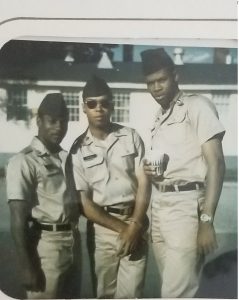 In 1968, Charles was a senior in high school. Like many young men at that time, he was drafted into the Army at the age of 18. He went to boot camp in Ft. Knox, Kentucky and in 1969, he was stationed to service in Vietnam. He flew to Vietnam with six fellow Army soldiers that he had come to know as his friends. Shortly after their arrival, the soldiers decided to go into town. Normally Charles would have gone with them, but he was not feeling well on this day, so he decided to stay back at the camp. This trip ended in tragedy when his friends were electrocuted and killed attempting to get into a building in one of the villages off base. Losing his friends in this traumatic way has stayed with Charles throughout his life. Unfortunately, this was not the last traumatic event Charles would endure while serving in the Vietnam War. On another occasion, Charles was going back to his base camp one evening on a transport truck that was hauling water and supplies from the main compound, when he and another soldier drove over a land mine with their vehicle. The resulting explosion sent barbed wire into Charles’s back and through his stomach. He was hospitalized for almost a year as a result of these injuries. After he recovered, he continued his service in the Army and was stationed in Germany with the Communications Unit until 1972.

Following his Army service, Charles returned home to the Unites States and began working as a cook in a restaurant owned by a family member. Charles became a father and had 5 children. Charles attempted to return to a normal civilian life following his army service, but his experiences in Vietnam left him suffering with intense flashbacks and nightmares, as well as anxiety. The negative memories caused him to make some poor decisions which affected his physical and mental health. Charles reached a low point until the birth of his youngest daughter, Shayla. He credits her birth as an event that helped him realize he wanted to turn his life around. He remembers fondly cutting her umbilical cord when she was born. It was a powerful moment when realized he was the first person that Shayla saw when she opened her eyes. This experience caused Charles to devote himself to Christ and changed the course of his life for the better. Even now, Shayla has been her father’s main source of support and encouragement. She encourages him to get stronger and advocates for him, when needed. The two have a strong bond.

Charles’s physical health issues forced him to leave his job at the restaurant after 17 years. He could no longer maintain long hours of standing on his feet. Charles continued to work by assisting at a horse farm. He also did side work for the church across the street from his apartment. Unfortunately, in April 2018, Charles had a stroke which resulted in a month long hospitalization. Charles was then admitted to Fahrney Keedy Nursing Home to continue his recovery. During his time at this facility, Charles felt his connection to Christ deepen and he was baptized while residing there. The team of professionals at Fahrney Keedy were very supportive of Charles and he felt very motivated to get back home to his apartment. In July 2018, Charles met his Service Coordination Supports Planner, Marjorie Schlosser. Marjorie was able to assist him with his enrollment in the Community Options (CO) Waiver. With Marjorie’s help, Charles was able to return to his apartment in October of 2018. Marjorie assisted Charles to access Transition Funds for groceries and toiletries, a new sofa, and a new bed before returning home. He was also approved for Home Delivered meals and 35 hours per week of Personal assistance.

“I feel very lucky to serve Charles,” said Marjorie. “He has been a bright spot for me at SCI.” Marjorie describes Charles as a very kind and generous. She said, “Charles is the type of person that no matter what is going on in his life, he is going to give you the shirt off his back.” Despite many challenges, Charles never lost sight of his goals and continues to work to get stronger since his return to the community. He said, “I have faith in God that I am going to walk again.” When asked about his Supports Planning Services with Service Coordination, Charles said, “I’m tremendously happy because I am at peace at home. I know I’d be more depressed if I didn’t have Marjorie’s help. I appreciate all that she has done.”