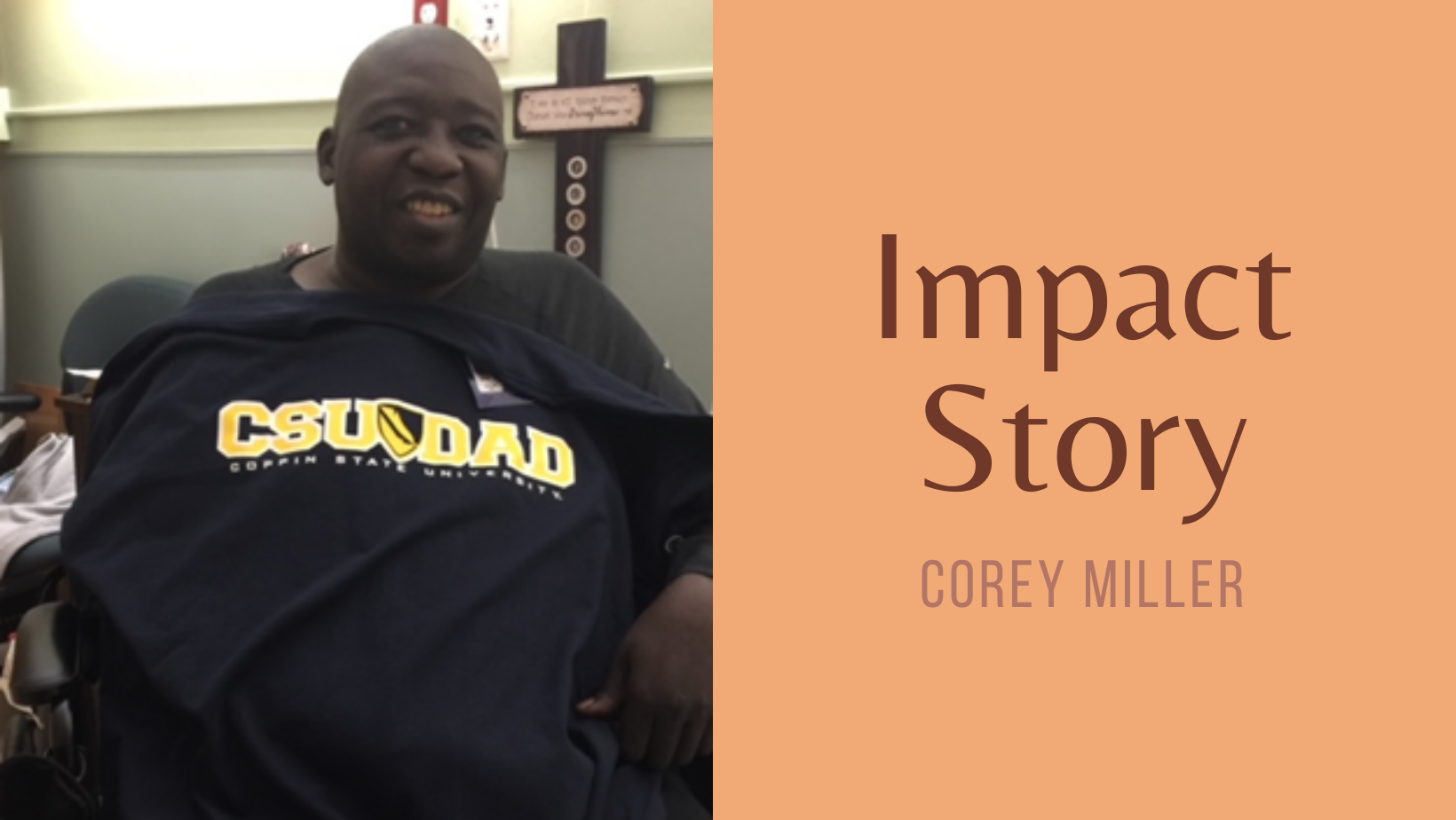 SCI’s Supports Planner, Antoinette Berry was assigned to assist Corey Miller in July of 2020 and made it her duty to address his needs. Corey was located at Future Care Lochearn, a short-term Rehabilitation and Nursing Care Center in Baltimore Maryland and wanted to return home with his family. Unfortunately, his mother did not have the space where she resided with her daughter in Howard County.  After weighing all his options for the Community Options Waiver, Corey made the decision to move into an assisted living facility.

There were several obstacles in the beginning when it came to getting the initial paperwork signed.  Corey was unable to sign the documents due to his own barriers and his mother was also not able to assist.  Luckily, his daughter was able to help.  Due to COVID-19 regulations, Corey’s daughter had talk to Corey outside of the nursing home. She was appointed his representative and was able to sign all the documents, allowing the process to move forward.

However, it was difficult finding assisted living options for Corey because he required support from two people to transfer, desired a private room on the first floor and utilized a wheelchair for his mobility.  Corey also had certain areas within Maryland where he wanted to live, which limited the search. Eventually, an assisted living facility was agreed upon and the discharge process started.

During that first discharge meeting, the realization that he would need an aide to go with him to dialysis became the topic of discussion.  It was soon discovered that the chosen assisted living facility did not provide such a service and another one would have to be found. Antoinette was made aware that the location had to be wheelchair assessable and have staff available to attend dialysis with Corey 3 days a week.  Antoinette contacted several assisted living facilities and ran into some problems. Some facilities did not have the staff, some were not wheelchair assessable and others did not take dialysis patients.  Corey was eager to move, so he expanded the area of search.

The Social Worker at Future Care Lochearn and Antoinette came up with a goal to find a way to either get someone to assist Corey into dialysis or find a facility that had designated staff to assist.

Finally, Antoinette asked if Corey could continue dialysis at the Future Care Lochearn nursing home. She found out that he would be able to do this, but they would not escort him since he would no longer be a resident of the nursing facility. The Social Worker then remembered another resident of the attached assisted living facility who attended dialysis 3 times a week with the assistance of an aide. She provided Antoinette with the contact information to the assisted living facility.  Antoinette called and was told the facility had a room available and Corey was accepted.  The Social Worker in turn made sure Corey was on the schedule to continue dialysis at Future Care Lochearn.

With perseverance, Antoinette was able to find a solution that worked for everyone. Corey Miller’s mom told Antoinette that she was happy her son had someone to help him every step of the way. She also thanked the team for working hard and not giving up.